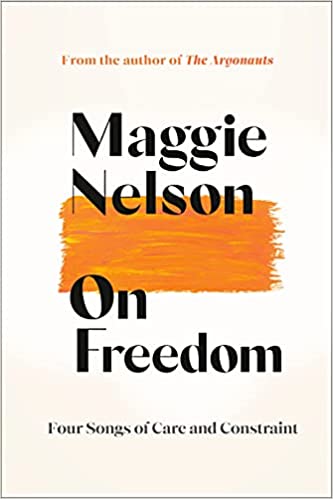 In Maggie Nelson’s new book, On Freedom: Four Songs of Care and Constraint, she invokes, or rather curates, a vast landscape of contemporary thought and thinkers in an expansive exploration of a rich, yet elusive concept.  One such of her favorites, Donna Harraway admonishes us that “it matters what matters we use to think other matters with; it matters what stories we tell to tell other stories with; it matters what knots knot knots; what thoughts think thoughts…think we must, we must think.” Nelson takes this concept to heart and makes it manifest in this book, which is a success in what it tries to do.

But isn’t freedom an empty, tainted concept?  Don’t we know what it is?  She lays out her agenda right at the beginning: she is going to “stick with freedom” for two reasons.  First, a long-standing frustration with its capture by the right wing (think about the freedom in “Freedom Summer” and Women’s Liberation being converted over a few short decades to the freedom of the American Freedom Party or Operation Enduring Freedom).  Second, reservations about emancipatory rhetorics of past eras that freedom is thought of as a future state, an event horizon instead of a constant, unending continuous practice.   She navigates both in tandem with great skill and troubles the concept in a way that is at once disorienting and comforting.

The book should be of interest to religious naturalist readers since the last chapter, (which we seem to be being prepped for through the three earlier chapters) is about climate change.  But not only that.  She takes it as a fundamental truth this whole thing we’re in is more of a “we” than an “I.”  And not only that, but that we are also dependent on “nonhuman forces that exceed our understanding or control”; increased entanglement can “offer sustenance” but also “be painful”.  These concepts pervade the other chapters, which take on art, sex and drugs.

There is so much about her in this book – it’s not just theory – she weaves the thought into the concrete of her life in a way that I found appealing and real.  She addresses the reader frankly and openly in ways that sometimes make her look like a hero – giving up drinking for example, and thereby entering a world of perspective and depth (one envisions possibly the world in which this book could come into being).  Other instances of this interweave put her in a darker place of an anti-hero – but all the stories are seamless with the thinking.

And when it comes to climate change and ecological destruction, and the utter despair that it often engenders, Nelson says we’d be best to “ride the blinds” – a concept that comes from a book by Fred Moten and Stefano Harney that refers to a hobo’s hiding between the cars to evade capture by police.  A conceptual riding of the blinds gets us out of the need to get everything into “story” mode – that the arc of history is bending towards justice, or imagining far off worlds in which art takes over technology, or that “scare us off the course”.  When we “drop the story”, we can get into a good thickening of time, of folded time or intergenerational time; a time that becomes more palpable.  This in turn invites care-oriented attitudes that are open-ended and don’t require tying ourselves in knots about some future state, but rather recognize how “temporal abundance” of living in the moment always involves “making choices about lessening or increasing future suffering.”

Nelson makes claims that may clash with many RN’s basic beliefs about climate change, but undeniably articulates with RN themes in ways that are fresh, complex, and compelling.  This work is an achievement and I recommend you give it a serious read.