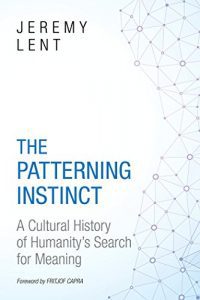 I first came across Jeremy Lent’s work about a year before The Patterning Instinct: A Cultural History of Humanity’s Search For Meaning was published. I’m not sure how I stumbled onto his website but I soon realized that this man was exploring and writing about a lot of the things that I was interested in. I devoured the material on his website.

When I heard that Jeremy was working on book that would trace humanity’s search for meaning through the ages I couldn’t wait to get my hands on a copy. I pre-ordered it and impatiently awaited its arrival. It was definitely worth the wait.

“Taking the reader on an archaeological exploration of the mind, The Patterning Instinct offers a glimpse into the minds of a vast range of different peoples.”

“The book identifies the root metaphors that cultures have used to construct meaning in their world––from hunter-gatherer times to today’s global civilization––and demonstrates how these have affected the course of history. ​“

In his exploration of how people have created meaning over the course of human history Jeremy points out that Western Civilization has largely been shaped by a belief in dualism. There is an assumption, beginning with Plato, that there are two separate realms; the material realm and the non-material realm. The non-material realm was and is still thought of as a spirit realm or a realm of pure consciousness. The material world was rejected as an illusion. A separation between human beings and the source of their being was created.

The Patterning Instinct explains, as we are beginning to recognize, that the most dire outcome of this split was a separation of humans from nature. Jeremy goes on to show how this splitting of reality eventually led to a mindset whereby a dominance of humans over nature was justified. Nature became a resource for humans to exploit at their pleasure.

After a thorough investigation of the evolution of Western thought Lent turns to eastern cultures where a very different cosmology had emerged. As he explains:

“In contrast to Greek and Indian cosmologies, the Chinese tradition looked to the material world for the source of meaning, seeing the cosmos as an indivisible resonance comprising heaven, earth and humanity, forming a harmonic web of life.”

In The Patterning Instinct Jeremy Lent describes in impressive detail how the Neo-Confucian conception of the cosmos avoids the problems arising out of the dualistic mainstream Western model. Lent contends that the wholistic interdependent view of reality could serve as a way of understanding our place in the world and that this understanding has the potential to guide us toward recovering from the damage we have done under the sway of the dualistic model.

Reviews of The Patterning Instinct:

“The most profound and far-reaching book I have ever read”

“Such an important, necessary, and wise book”

“Joining the dots between points in history and culture”

The Patterning Instinct: A Cultural History of Humanity’s Search For Meaning is published by Prometheus (May 23 2017).

Jeremy Lent’s latest book, The Web of Meaning: Integrating Science and Traditional Wisdom to Find our Place in the Universe, is published by New Society Publishers (July 12 2021)