At Home On An Unruly Planet 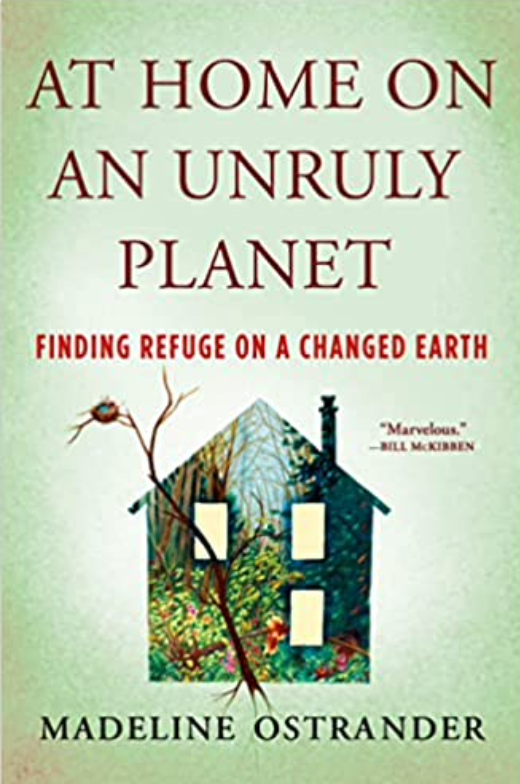 The word nostalgia was coined to mean home-grief, similar to the German Heimweh (literally meaning home-woe). Nostalgia has evolved to mostly mean yearning for the past, and the word we now use for its original sense is homesickness. But now in this century, the Australian scholar Glenn Albrecht has coined the term solastalgia to mean, the homesickness experienced when one has not moved but one’s environment has changed. This is what we are facing.

Ostrander writes, “Humans have never before made a home under this kind of sky, within the sorts of climatic conditions that we have now created…the last time the Earth’s reading [of carbon dioxide concentration] was anywhere near that high [419 parts per million] was at least four million years ago, two million years before the handy people were chiseling tools at Olduvai. The climate has never changed so quickly or so violently in all of human existence…the planet could warm to such a catastrophic level that we would barely recognize this Earth at all…I think that we may not make it through this crisis if we forget that home isn’t just a thing we build, but an awareness of and care for our surroundings and the capacity to imagine new ways of living in them. We will need a new set of stories about what it looks like to live on the Earth in a manner that doesn’t destroy our future. We will need to figure out how to make a home in the greatest crisis we’ve ever known.”

The book goes on to quote recently deceased essayist bell hooks who noted that “[my grandmother’s] house is a place where I am learning to look at things, where I am learning how to belong in space” while in her parents’ house, “space was not to be created but owned [and] consumerism began to take the place of that predicament of heart that called us to yearn for beauty.” She wrote that “In my mind and imagination I was always returning to the Kentucky hills, to find there a way to ground my being,” and that “I plundered the depths of my being to see when and where did I feel a sense of belonging, when and where did I feel at home in the universe,” and that her ethic of place was “a culture of belonging rooted in the earth.” On the other hand, the notion of neoliberalism, Ostrander writes, “reduces our individual power to act in the world via democratic or collective process and makes us tiny actors in the global market. And in this schema, home is not a thing you belong to.”

In the final essay chapter, Ostrander writes, “Unfortunately, many of our society’s most enduring notions about the setting of boundaries and the sharing of resources within them come from ‘the dismal science’ (aka, economics) and social Darwinism (a distortion of evolutionary theory that proposes that human cultural groups should tussle for ‘survival of the fittest’ in order to better the human species), a grim combination indeed.” We cannot ignore the so-called tragedy of the commons, as “we are inextricably bound to one another by the common Earth we all live on.” But we can manage the commons effectively, as shown by Elinor Ostrom, winner of the Nobel Prize in Economics in 2009. Ostrom studied how governance of the commons or even entire ecosystems is doable in practice without resorting to outright government ownership or individual ownerships of tiny domains. Ostrander elaborates, “We don’t have to write that tragedy. We don’t have to divide the Earth into billions of little allotments or fiefdoms and put up walls to keep our neighbors out of our personal space. Nor do we need to build a dystopia. No iron-fisted ruler, no draconian policies or denial of human rights will save the planet we live on. In fact, either of those strategies could almost ensure ruination.” Unfortunately, though, we are not starting from a grounding of good governance relating to our planet’s climate. Furthermore, Ostrander writes, “The climate crisis is not really a tragedy of the commons, however. We do not each have an equal share of the sky (as Doria Robinson has pointed out) nor have we had collective say over what happens to it. Climate change is another kind of calamity—largely caused, not solved, by the actions of certain powerful private enterprises, and by inequality, a lack of transparency, and outright denial and deception…It is up to the rest of us to hold the boundaries, build the metaphorical fences, and rein in the problem. In the same month that she won the Nobel, Elinor Ostrom also wrote up some of her own ideas for the World Bank about how this kind of regulatory process might work for carbon emissions. Her discussion of the subject was not so different from the story she’d told about any other shared resource. In essence, there would need to be polycentric solutions—at every level, in cities, towns, regions, states, and nations, tailored to the particular places where we all belong. And at every level, a climate-master of sorts (like a watermaster) would have to stop the free riders.” At this moment, however, Ostrander notes, “The free riders are still driving us inexorably beyond the limits of what is safe, and I wonder if too many of us are waiting for some iron fist of government to save us. I wonder what it would mean if we all fully grasped that this is a fight for our homes and our safety. What if more of us stepped forward to defend the space above us, the ground beneath us? What if we took charge everywhere, to create new rules, to draw boundaries around the places we care about and insist together that they cannot be crossed? We hold this one planetary home in common, and it is both unethical and disastrous to continue to allow a few bad actors to decide what happens under our shared sky.”

So our climate situation is not without hope, but we definitely have our work cut out for us. In the book’s epilogue, Ostrander concludes, “Home is a way for us to rethink and reimagine and remake our lives. Home asks us to adjust ourselves, to rewrite ourselves, to reconsider who we are, again and again, each time we occupy a new space or refashion an old one. We are all building these walls and roofs and lives together, on this one messy and unruly blue planet.” To paraphrase Ben Franklin, we have a shared beautiful beloved planetary home, if we can keep it.