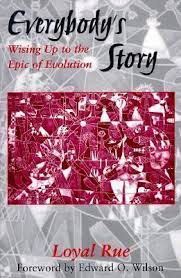 EVERYBODY’S STORY:  WISING UP TO THE EPIC OF EVOLUTION

Part I:  How Things Are

Each of the growing number of books that explores the religious potential of the scientific worldview carries, by definition, the imprint of the training and perspective of the writer:  Thomas Berry’s lens is that of a historian of religion, Brian Swimme’s that of a mathematical cosmologist, Wilhelm Drees’s that of a theologian, mine that of a molecular biologist, and so on.  In Loyal Rue’s offering, “Everybody’s Story:  Wising Up to the Epic of Evolution,” we have the perspective of a philosopher of religion who is deeply versed in the western philosophical and religious traditions and has also taken the time to understand not just the core features of the scientific worldview but also its implications.  The result is a most valuable contribution to the project, one that should become a particularly important addition to the reading lists of courses in religion and science because it is brief, accessible, masterfully written, and eminently incisive.

The book is in many ways the sequel to Rue’s two previous books.  In “Amythia” he argues that our culture lacks, and needs, a metanarrative to live by, but he stops short of offering one, perhaps because he first needed to write his second book, “By the Grace of Guile,” where he takes on the postmodern critique of metanarratives and makes the case that the important property of a metanarrative is not that it be True but that it be adaptive.  In “Everybody’s Story” he goes ahead and “tells” the epic of evolution, minimally but evocatively, and then employs the careful logic of his trade to demonstrate why it is that this story is adaptive, how it has the potential to best optimize both personal wholeness and social coherence, the two proximate goals of a human life.

How does Rue frame his argument?

He begins with a familiar but compelling lament of our global problemmatique, and concludes that “a set of global, systematic, immediate, and chronic challenges calls for responses that are likewise global, systematic, immediate, and enduring.”  He lifts up the centrality of core Myths in the functioning of their resultant cultures, reviews the major Myths that have come to us from the Axial period and, while acknowledging their crucial historical role in expanding human solidarity and cooperation, points to their inadequecies as foundational narratives for the future.  “Our calling is no less than to achieve for our time what these ancient traditions did for theirs, that is, to transform social and psychological realities in ways that effectively redress the global problematique.  To do this this we must find the courage to be no less radical in our storytelling than were the Axial prophets and poets.  Their achievement is our source of courage and hope for a new Axial Age.”

So what would such a story tell?  “Any story claiming moral relevance to the global challenge will not only factor in the mundane conditions of our existence, but will go beyond this to proclaim them sacred.”  And then, as have others in this emerging tradition, he embraces the evolutionary story.  “The universe is a single reality – one long, sweeping spectacular process of interconnected events.  The universe is not a place where evolution happens, it is the evolution happening.  It is not a stage on which drama unfold, it is the unfolding drama itself.  If ever there was a candidate for a universal story, it must be this story of cosmic evolution….This story shows us in the deepest possible sense that we are all sisters and brothers – fashioned from the same stellar dust, energized by the same star, nourished by the same planet, endowed with the same genetic code, and threatened by the same evils.  This story, more than any other, humbles us before the magnitude and complexity of creation.  Like no other story it bewilders us with the improbability of our existence, astonishes us with the interdependence of all things, and makes us feel grateful for the lives we have.  And not the least of all, it inspires us to express our gratitude to the past by accepting a solemn and collective responsibility for the future.”

During his telling of the story he pauses to challenge the coherence of such perspectives as the Anthropic Principle and Intelligent Design, but his trajectory is in the main a constructive one.  He stresses the crucial and as yet only dimly appreciated point that the hallmark of evolution is the creative process known as emergence (something more from nothing but), a dynamic that is particularly important in biological and cultural evolution where the instructions for generating emergent properties can be remembered and transmitted (albeit by distinctive kinds of mechanisms).  “Sometimes the magic and the glory are less in the thing itself than in how it comes to be.  And so it appears to be with the self.  It took nearly four billion years of biotic evolution and a hundred thousand years of cultural evolution to organize selves who are capable of composing and comprehending this sentence, and neither you nor I had anything to do with it.  For what it is worth, to be a self is to inherit a fortune of organization.  Our part is merely to invest it.”

It is apt to quote here a passage that Rue recently posted on META.  “Some analysts of religion argue that stories function to support, enrich and extend our religious belief systems.  In other words, structural beliefs are primary and narratives are secondary.  This is simply not the way it works.  Myths are primary and persistent, while theological interpretations and clarifications of them are derivative, variable and provisional.  Show me where the narrative impulse comes from and I’ll give you an explanation of religion.”  It is in this spirit that Rue writes his concluding section, “Which Things Matter?”  With broad strokes he argues that given the epic narrative, what ultimately matters is viability, that what proximately matters is personal wholeness, social coherence, and the integrity of the biosphere, and that these are best achieved by a set of moral precepts that he outlines.  I happen to agree with his proscriptions; other readers may draw up different lists.  But compilers of competing lists will be challenged to argue their case with the same intelligence and clarity employed by Loyal Rue.  He has set a high bar.

And what does Rue do with theism?  In his Epilogue he writes, “There is nothing in the substance of everybody’s story to rule out belief in the reality of a personal deity.  At the same time, such a belief is not an essential part of everybody’s story.  There will be theistic versions of the story, and there will be nontheistic versions as well.  Those who take the theistic option will have at their disposal a range of images that may be used to arouse motivational systems.  But I have confidence that everybody’s story, unadorned by theological imagery, has the potential to arouse us to serve its imperatives.  Let us see.”