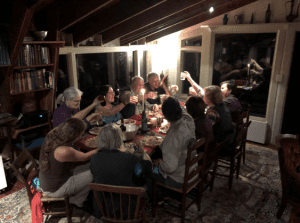 I had the pleasure of hosting a second Boston-area RNA weekend retreat at my house on Martha’s Vineyard two weekends ago. Our toast above is lifted to you all.

Some of us knew each other, some didn’t, and it didn’t matter – when we departed we were all deeply connected. Everyone brought food and openness and warmth. We braved 40 mph winds on the beach; we made music; we cooked; we cleaned up; and we talked and talked and talked.

At one point during a conversation about RN ritual, I remembered that I’d purchased as-yet-unplanted bulbs, so some of us dug up some earth near the house and put them in, in the spirit of this poetic passage from a sermon written by Australian RNA member Rex Hunt:

Today a woman is planting flowers in her garden.

She is digging, dirtying, straining, mulching and lugging,

under the power of plants which do not yet even exist,

but whose images have taken up residence in the atoms

and cells within her imagination.

Weeks or months will elapse before her labour is fulfilled.

Patience and faith will sustain her until, under the majesty of Earth’s dominion,

the unprepossessing little bulbs and seeds will explode into

A war will have been won by soft and coloured things.

The yellow eyes of asters, the purple tongues of irises, and the crayola pansies

have raised their banners above the turrets of Earth’s soil

to defy the dark cold space that pervades almost all of everything else.

If there were a heaven, the gods would abandon it

just for the chance to see this woman in her garden.

Hosanna! Not in the highest, but right here. Right now. This.

A Newer Testament. The gospel of the natural present moment.

Gratitude — a particularly joyous religious sensibility. May all of you experience its joy in the coming days.