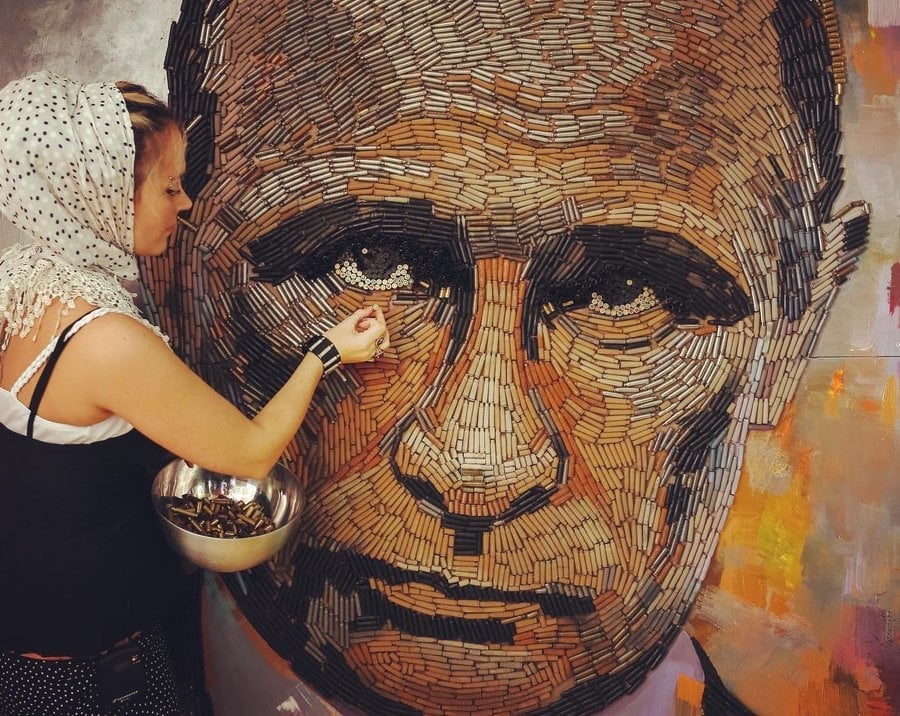 “The Face of War” by Ukrainian artist Dariya Marchenko. Made with 5,000 bullet casings.

In a recent opinion piece in the The Guardian entitled “What’s going on inside Putin’s mind? His own words give us a disturbing clue” by Michel Eltchaninoff, the author looks to Putin’s speeches for indications of the Russian president’s thinking. What emerges is a picture of a man who not only is dangerously ignorant of the workings of natural systems but whose policies are antagonistic toward the values associated with them such as sustainability, inclusion, cooperation, humility, and contribution, etc.

As a former KGB agent (16 years) Putin became fiercely loyal to the USSR. He was deeply troubled by the gradual breakup of his country. Michel Eltchaninoff quotes Putin from his speech on Crimea in March 2014:

“The politics of the containment of Russia, which continued throughout the 18th, 19th and 20th centuries, continues today. There is a constant attempt to push us back into a corner because we have an independent position, because we stand up for ourselves.”

Putin seeks to restore Russia to its former glory by reclaiming the territories it has lost, Ukraine being one of the most important economically and politically.

Vladimir Putin is obsessed with re-establishing a strong independent Russian state. This kind of fierce nationalism is an expanded version of what social anthropologists call Tribalism. Tribalism is characterized by a strong allegiance to one’s in-group (tribe, territory, race, nation, religion).  Within the group may reside beliefs in the group’s superiority over other groups and often a willingness to defend or expand the group’s interests at all costs. While tribalism is a naturally occurring phenomenon it becomes a serious problem when the natural human need for membership that drives it is intentionally manipulated for personal or political gain in such things as appeals to mindless patriotism. The idea of a powerful independent state is not a model that makes sense in the interdependent world in which we live today. As the world becomes more and more interconnected countries attempting to function independently are becoming increasingly unsustainable.

According to Michel Eltchaninoff’s article Putin’s almost religious belief in the glory of Russia has been influenced by Lev Gumilev, a 20th century historian and ethnologist. Gumilev postulated that every people has a passionate inner force that he calls *passionarnost.* Eitchaninoff quotes Putin as saying:

“I believe in *passionarnost*. In nature as in society, there is development, climax and decline. Russia has not yet attained its highest point. We are on the way”.

“We possess an infinite genetic code.

Although Putin seems to think that passionarnost reflects a feature of nature, nothing could be further from the truth. Passionarnost is just another word for an unbridled patriotism of the kind that promotes division and hatred between peoples of different ethnic, racial, and religious backgrounds. This kind of thinking is particularly dangerous in a time when we are facing serious global issues that will require an extraordinarily cooperative effort to address.

Putin’s personal belief system has been shaped over his lifetime but the widespread mindset from which it has arisen is not of his making. The idea of separate independent individuals and countries has been the a dominant perspective since the onset of Western Civilization. Putin’s words and actions are just obvious examples of the wrongs that can occur while this perspective prevails. It is essentially an anti-naturalist position because it denies the interdependency that characterizes the existence of all living things.

What is needed is a fundamental shift in how we understand ourselves and our place in the world. Naturalism, and particularly, the Religious Naturalist orientation offers just such a worldview.

The month’s music offering is “Russians” by Sting. At the beginning of the video Sting makes a poigniant comment about the current situation in Ukraine.

PLEASE NOTE: The link to the video may be broken. It has, for some reason, changed several times over the past couple of days. If this is the case you may be able to find the video by Googling “Sting Russians video”.

Be calm, be kind,
Terry Findlay