This has obviously been a different type of summer (or winter). My wish is that you all have been well. But, along with this is recognition that, with 600+ members, it’s likely that a number have not. These times can be a test, of sorts, in how religious naturalist perspectives can contribute. One part of this can include showing reasons for hope, from several perspectives, as we can appreciate medical advances and helpful practices that can come from study of the natural world, and ancient wisdom (that “This, too, will pass”), and the encouragement and strength that come from family and friends as people care about and support one another.

Conversations have been active at the RNA.net and .Facebook venues, with a number of new voices joining in, and with some new initiatives and ideas. Part of this includes growing use of online meeting platforms. As Michael mentioned in an earlier newsletter, some local RNA groups have formed and are using Zoom for conversations. If anyone would like to learn more about what has been done, or is interested in potentially hosting meetings with other RNA members, let us know. RNAsecretary@aol.com

News this month includes the annual meeting of the RNA Board of Directors, via Zoom. This included welcoming Jason Keune and Esther Hopkins as two new members of the Board of Directors, and recognizing Terry Findlay as an officer for all he has done and continues to contribute as Webmaster. Also, to show support for recent protests and initiatives, the Board unanimously approved a RNA Statement of Racial Solidarity, which is now positioned on the Home Page of the RNA website.

Another piece of news is to mention a new book by RNA member Demian Wheeler, Assistant Professor of Philosophical Theology and Religious Studies at the United Theological Seminary of the Twin Cities. The book is Religion within the Limits of History Alone and includes several chapters that deal with naturalism and religious naturalism.

I’ll close by forwarding a link that was posted at RNA.Facebook, to a 3 minute animated poem, What Happened When We All Stopped. This was created as a way to talk to children about climate change and what can come with a positive response. It’s narrated by Jane Goodall who, in describing how she was inspired by this poem, and as part of her ongoing voice toward positive change, said, “I’ve often considered it strange that the most intellectual creature ever to walk the earth is destroying its only home. . . . We must find a way of living in harmony with nature so that both may thrive.”

Best wishes to all. 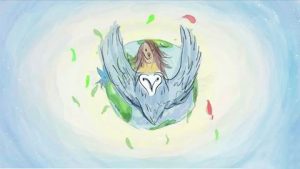